New York City is a great place to ride a bicycle. And it’s getting better.

I expect it will take some convincing for you to believe the above.

So hereforth I’m offering up a listicle.  Seven Reasons Why.  Seven is a great number for a listicle, and the reasons outlined are even better.

First, New York City is fairly flat, so you rarely have to concern yourself with steep hills to climb or descend.

Second, the city is fairly compact, so no matter where you are, it’s easy to find places to ride.

Third, because of all the density and all the stuff going on, drivers often find it hard to speed. And speeding is one of the biggest dangers cars present. Yes, there are some distracted drivers, but really distracted driving is dangerous for drivers and most realize it on busy streets. Non-cyclists look at a Manhattan avenue and they see chaos, but it’s actually quite manageable. The cars have to cross a street every 1/20th of a mile, which means a traffic light, and at every crossing they have to worry about pedestrians darting out. They have to worry about parked cars suddenly jumping out. They have to be ready for a cab driver to cut them off. They have to get a read on when the bus is going to stop. They can’t see beyond the delivery truck in front of them. And there are pushcarts, potholes, horse-drawn carriages, and so on.

Fourth, there is a large and growing network of bike paths. And the city government has made a big commitment to re-imagining the city as being dominated by human-powered transport and mass transit. The changes are happening pretty fast: when I first tried my tri-borough route, they were just starting work on a bike path entry to the 59th Street bridge. By the third time, a few months later, the path was within days of completion.

Fifth, there is incredible diversity in the city. Whether it’s architecture, food, people, old stuff, new stuff, arcane stuff, it can be found. And cycling allows you to sample the diversity more easily than you can by any other mode of transport. You think you know what the city looks like? Think again. It’s more than skyscrapers and suburbs.

Sixth, the weather is conducive for riding. Yes, it can get pretty cold in the winter and pretty hot in the summer, but it’s rarely below freezing for long and rarely above 90 degrees Fahrenheit for more than a short stretch or three. And we’re not overwhelmed by precipitation any season of the year. In the winter, it snows, but rare is the storm that leaves roads snowy for more than a few days afterwards.

Seventh, because of all of the above, using a bike for commuting, visiting, errands, as well as exercise is easy. No need to get in a car when all you’re doing is picking up some Chinese or dropping off a library book. Got a small kid? Put a seat on the back of your bike and take them with you. Riding is more fun than taking the subway and often faster than the bus.  And with Citibike expanding, you can use them as one-way rides and don’t need to bring a lock with you.

Take a quick scan of the rides in the book.  You’ll see that many of them are on the edges of the city and in parks. This was a deliberate choice. Anyone can wheel onto a street or avenue and take it somewhere without a guidebook. I was more interested in creating rides that take you somewhere you might not otherwise go. 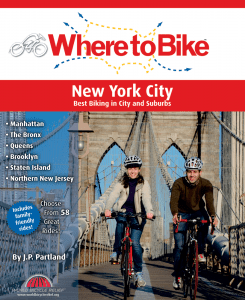